Lucasarts – A Tribute to a genre defining studio

In 2013 a lamentable moment in videogame history occurred, the once prolific developer Lucasarts closed it doors.  The company was well know for the consistent quality of it’s work as well as the myriad of popular licenses which were crafted into beautiful interactive experiences enjoyed by gamers worldwide.

Lucasarts started life at the (in)famous Skywalker Ranch where George Lucas was investing time and money, creating new audio experiences for cinema goers and also new forms of entertainment.  In 1984 Lucasarts had began experimenting with game development, the end products being Ballblazer and Rescue of Fractalus.  These were released on several microcomputers, the Atari 8-bit computers and the Commodore 64.  In an era of gaming where most developers were creating clones of coin ops, both these titles were seen as groundbreaking, innovative and technically ambitious in scope.

Rescue of Fractalus was an early first person shooter

In the early days of Lucasarts, the Star Wars franchise was strictly off limits, so it was up to the developers to create new franchises and characters.  The first defining release which heralded the golden era of Lucasarts was Manic Mansion in 1987.  This was a point and click adventure title which was designed as a loving tribute to B-movies and kitschy horror movies and 80’s teen flicks. 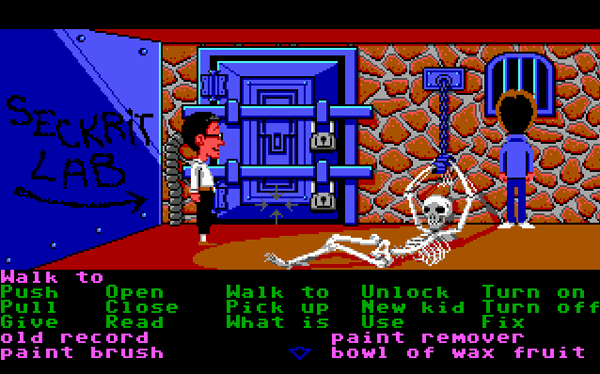 The game give the player the ability to solve puzzles, navigate a large, fully explorable area fully of quirky horror cliches and for those who wanted to kill something – you could even microwave a hamster.  It was the heady mix of exploration and niche humour which helped propel this title into the popular cult classic that it is known as today.

Another reason that this title became one of the highest regarded adventure titles came from the SCUMM engine (Scripting Creation Utility for Manic Mansion).  As the title suggested this was created exclusively for the game and was so successful that versions of it were used in every subsequent Lucasarts adventure game.

Monkey Island was the next adventure game to gain notice and became one of Lucasarts longest running franchise.   With Monkey island, the SCUMM system was upgraded and it could be said that the mouse-controlled graphic adventure (so enjoyed by tell-tale enthusiasts today)came of age.  The plot of the games begins with a wannabe pirate named Guybrush Threepwood, who is hapless but incredibly endearing, your initial goal is to guide him around Melee Island, where he has just landed and help him become the Pirate that he yearns to be. 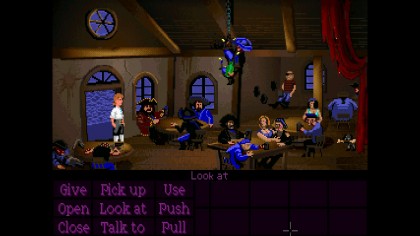 Improved Graphics, intriguing plot and winning humour made The Secret of Monkey Island essential in your gaming collection

If you want to play these titles, they are available from the excellent Good Old Games site

Before the innovation in the adventure genre that culminated with Manic Mansion, Lucasarts had already looked at crafting interactive storytelling with film franchises.  Surprisingly, their first foray into this field was neither Indiana Jones nor Star Wars, that was to come much later.  The first film franchise that was chosen for the Lucasarts treatment was Jim Henson’s Labyrinth, a beautiful, evocative fairytale which starred David Bowie as the Goblin King.  This game tasked the player with finding and defeating the Goblin king – Jareth, within 13 real time hours.  This was also a title which brought science fiction writing genius Douglas Adams on board and his ideas greatly influenced the end product.  It was, unsurprisingly, an innovative title and the game garnered more commercial success that the film which inspired it!

The Evil, yet Charismatic Goblin King

But, as we all know, Lucasfilm had so many iconic heroes and cinematic masterpieces which were ripe for translation into videogames, it was only a matter of time before Lucasarts raided their cupboard.  So it was, that the fedora hat wearing, stubbly beard and whip totting archaeologist, Indiana Jones was propelled onto our videogame screens.

There are an incredible amount of games based on Indy’s adventures, so it’s almost impossible to cover them all.  Some of my favourites include :

Indiana Jones and the Last Crusade

Lucasarts oversaw three Last Crusade titles, but the stand out version, at least in my opinion, was the adventure game.  Again powered using the SCUMM engine, this follows the majority of the film’s plot, seeing the player take Indy to the Venice catacombs and rescuing his dad from the Nazi’s in a castle.  This was far from a run of the mill adventure game, Lucasarts could help but sneak in innovation where it was least expected.  When you solved puzzles successfully you gained Indy Quotient (IQ) points.  In order for a player to get the perfect score they would be encouraged to be creative with their answers and techniques.  A fantastic movie tie-in

This was a fantastic console game – released on the SNES in 1994, Greatest Adventures takes it’s lead from the series of popular Super Star Wars games which were released to popular acclaim.  This side-scrolling adventure took the player through most of the famous scenes in the classic trilogy, boasting still frames from the movies, mode 7 action sequences and recreated soundtracks, this is a fantastic platformer which really portrays the heart and soul of movie franchise and delighted Indy fans worldwide. 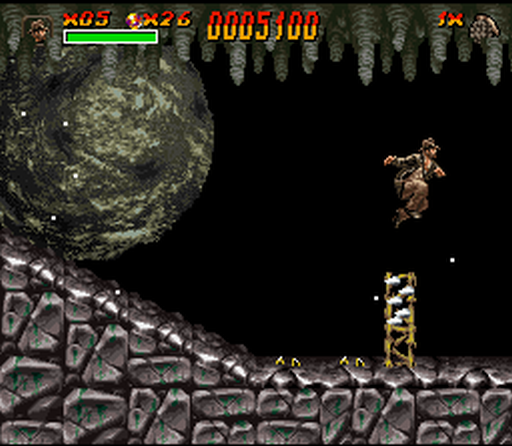 Many famous scenes were recreated in this classic platforming adventure

Indiana Jones and the Fate of Atlantis

Another classic adventure title which ran on the SCUMM engine and remains one of the best adventure titles ever developed by Lucasarts.  Indy (with his partner Sophia) must beat the Nazis to the underwater city of Atlantis.  After the first act, the game split into three parts, enabling the player to choose which way they wish to progress through the game.  The Wits path offered a more puzzle solving approach, whereas the Fists path gave the player a more combat orientated method to tackle the game.  The final choice, the Team path, keeps the two characters together as they solve different types of puzzles.  The game was also released on CD which featured phenomenal soundtracks and speech.

This game can be found on Steam or GOG 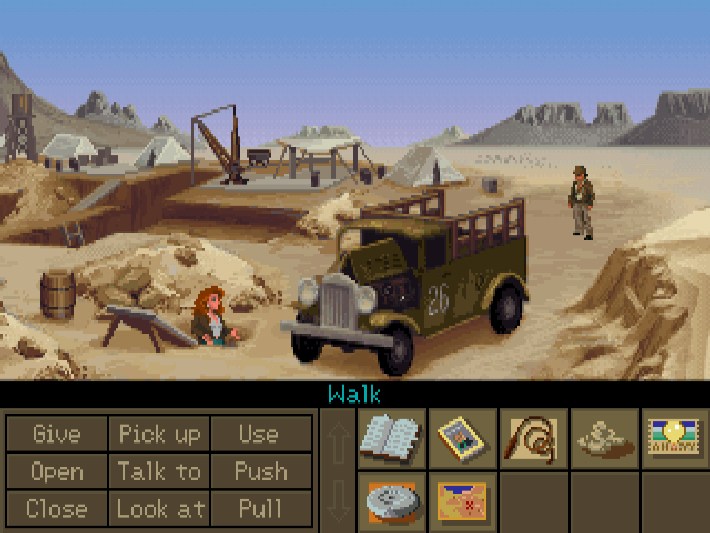 Wars Amongst the Stars

There had been a few video games released for the Star Wars franchise since Star Wars: The Empire Strikes Back for the Atari 2600, but Lucas’s own in-house game development company didn’t get to work on the franchise until the fabulous X-Wing series.  This DOS based space combat simulator placed you in the cockpit of various Rebel starfighters – X-Wings, Y-Wings and A-Wings with the ultimate aim of assaulting the Death Star itself.  The title boasted an incredible new 3D engine which became the template of every successive space combat sim and the game itself won the Origins award for the Best Fantasy of Science Fiction game of 1993.

X-Wing can be found on GOG 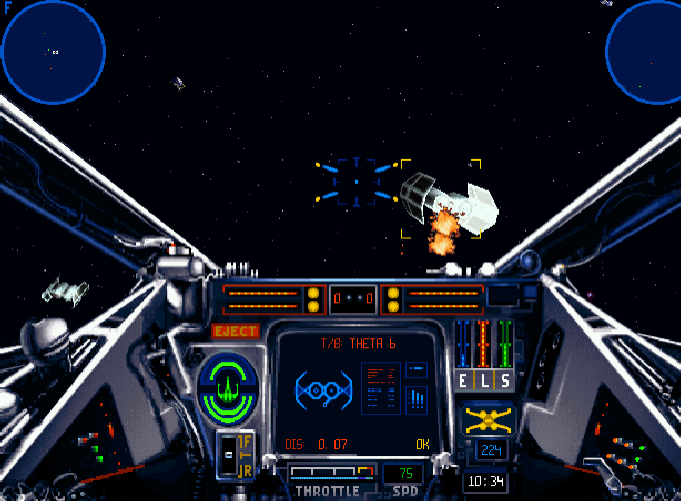 But it was X-Wing’s sequel which truly captured gamers and Star Wars fans imagination.  Long had many players wished that they could not only play as the Rebels, but as the Empire, gamers wanted to be free of the shackles of the light side and fully embrace the ways of the dark.  This wish was promptly granted with the release of the excellent Tie Fighter in 1994, giving you a chance to play as the bad guys.  It featured secret missions with enabled you to directly work for the emperor and his number one henchman – Darth Vader.

Tie Fighter can be found on GOG 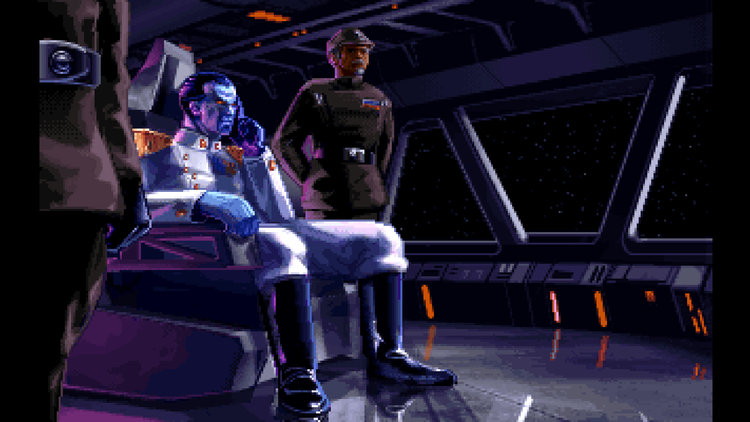 A series of movie style games followed, utilising the now popular FMV cut scene technology, pre-rendered 3D backdrops and digitised soundtracks and clips from the movies to recreate the sensations of the films as you played as ‘Rookie One’.   Star Wars Rebel Assault and it’s imaginatively named sequel Rebel Assault II: The Hidden Empire, incorporated real life footage of actors, high production value and expert use of John Williams epic score in an attempt to bring players new Star Wars experiences through truly cinematic gameplay.  However it’s on-rails nature kept it from achieving the glory that it was hoping for.

In 2003, another landmark title came out from the Lucasarts stable – Knights of the Old Republic, a truly epic role playing game set thousands of years before the original movie trilogy, featuring customisable classes, fantastic and sharp dialogue and a multilayered narrative which gripped the player throughout the experience.  It and it’s sequel, brought to Star Wars fans everything that the Prequels had tried, but failed to be. 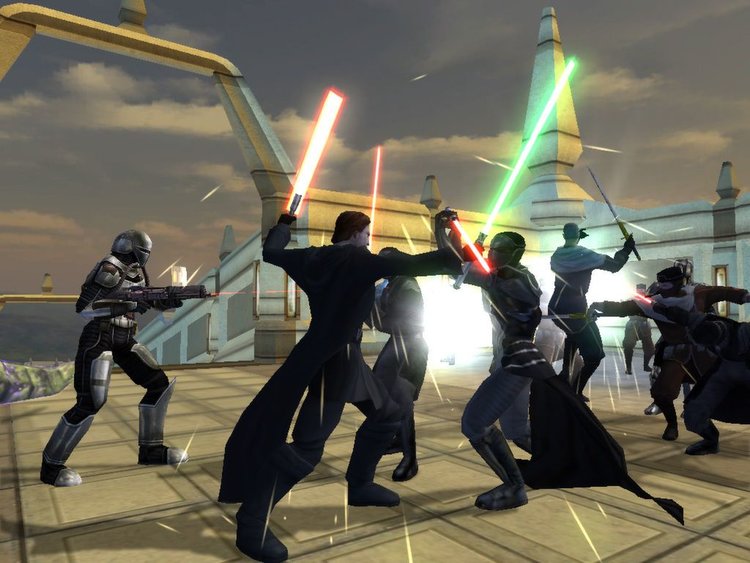 End of an Era and Rebirth of Old Titles

When Disney acquired the Lucas empire in 2013, they promptly shut this development behemoth down.  This was indeed a sad day for gamers who had experienced and became enraptured by the titles that this company had produced for over two decades, their reputation for outstanding quality and innovative approaches will live on.

For gamers of this current generation who haven’t yet experienced some of these classic titles or who wish to relive their fond memories, there is some good news.  Some of the Classic Lucasarts adventure titles have been revived, given a dust off and made available for PC and console.

Holding a PS4 controller and enjoying the great narrative design and laughing out loud at the superbly crafted humour which peppers the script, I fell in love with this title all over again.  It’s obvious to see after a play through (the first in over 10 years) that this game is far more ambitious in scope than most commercially made games today.  It’s a game completely fuelled by beautiful complexity of narrative, making this an incredibly satisfying adventure title.

It’s set in a vaguely futuristic time period (which is undisclosed) it’s not quite as bad as the dystopia which is featured in the Mad Max films, but it’s definitely heading there.  You play as Ben, the leader of a biker gang, who is framed for murder and becomes embroiled in  a conspiracy featuring a corporation which is the last to make classic motorcycles (the kind which don’t hover above ground)

It’s a simple plot, but fleshed out by fantastic character design and superb voice acting, including a turn from Mark Hamill as the slimy, corporate villain of the piece.  This is a fantastic gaming experience and has been remastered to enable 4K functionality, bringing the sharp cartoon graphics truly to life.

This title is often held up as the Last Best Adventure game ever made, at it’s release in 1998, it held almost universal critical acclaim and brought the player into the land of the dead and introduced them to Manny.  Manny Calavera is a supernatural travel agent who (like death) reaps the souls of the recently departed and sells them passage across the land of the dead.  The narrative is based on Aztec myths and the game is loaded with funky art deco design motifs.

Grim Fandango has aged incredibly well and it’s gameplay holds up today, remastered for the PS4, like Full Throttle, the control style has been changed suitably so that the whole thing feels comfortable and is overall a fantastic remastered conversion for modern consoles.

This is definitely a game to pick up, it showcases exactly why Lucasarts were seen as the premier game studio for producing adventure titles.  Fantastic character design, good acting and a killer soundtrack, this is a title which you will be talking and thinking about in years to come. 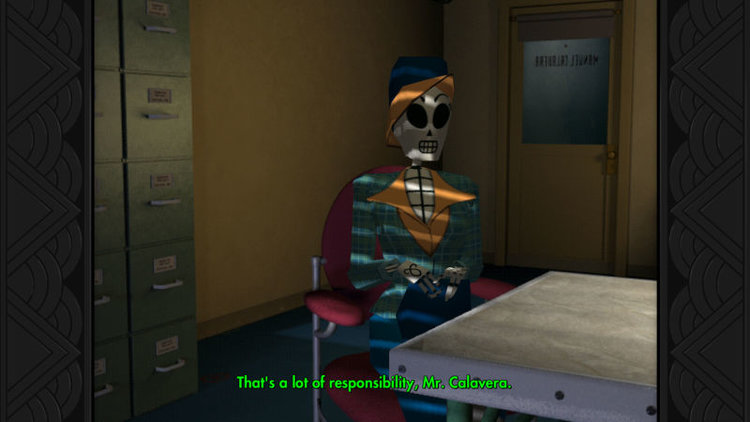 This was a brief history of Lucasarts, I featured some of my favourite games and memories, but I know there were so many more highlights of this developers library.  Please share your opinions and your gaming memories in the comments section, I would love to read them!