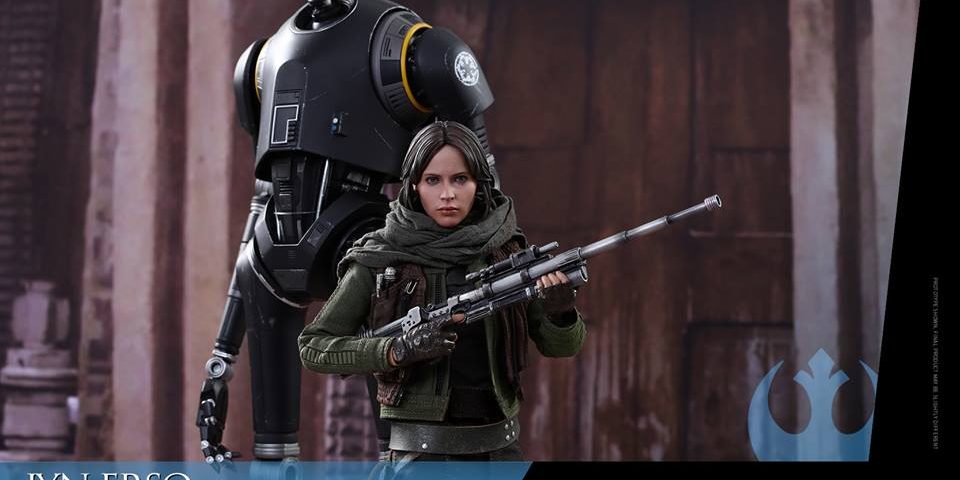 With Rogue One: A Star Wars Story being released next week, Hot Toys has revealed their Jyn Erso action figure! This is a deluxe version that comes with a lot more accessories for you to play with. We also get our first look at the action figure for the droid K-2SO in the photo above.

The Jyn figure is a meticulously crafted recreation of Felicity Jones in action figure form. They did such a great job getting her likeness down, and the details on the clothes and weapons that come were her are incredible… as always. Here’s the description that came along with the figure:

“We have hope. Rebellions are built on hope!”

A new chapter of the Star Wars galaxy will unfold in the widely anticipated Rogue One: A Star Wars Story starring the courageous new character named Jyn Erso. Jyn is reckless, aggressive, and undisciplined until she crosses paths with the Rebel Alliance where she takes her chance to make a real difference by taking on the mission to steal the plans to the Empire’s super-weapon.

This Deluxe Version will exclusively feature an additional costume including a poncho with bandolier, a breathing mask, hat with goggles, quadnoculars, and additional blaster parts for Jyn’s unique blaster that can be combined into multiple modes. It is the time to #GoRogue and recruit this fearless heroine to your Star Wars Hot Toys collection!