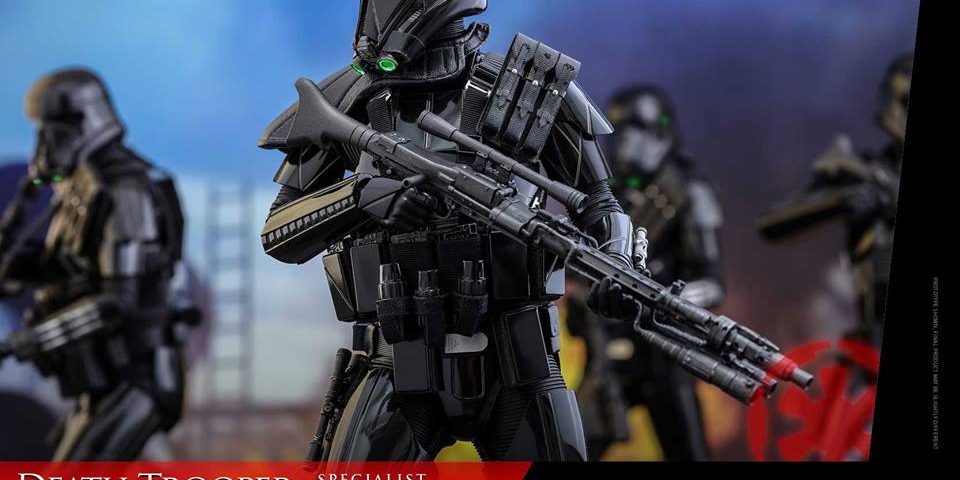 Hot Toys has officially revealed two of their Death Trooper action figures from Rogue One: A Star Wars Story. There’s the regular Death Trooper and then there’s the “Specialist Deluxe” version. I’ve included photos and details for both of these figures below. As you’d expect from Hot Toys, these figures are awesome! No one makes figures like this as detailed and accurate as Hot Toys does.

The debut of the highly anticipated film Rogue One: A Star Wars Story is imminent. Fans will soon witness the all new adventure featuring a group of Rebel heroes who must band together on a mission to steal the plans of the Empire’s ultimate weapon of destruction – the Death Star. Today Hot Toys is pleased to introduce a new 1/6th scale collectible figure representing the deadly elite troopers seen in the film – the Imperial Death Trooper! The highly accurate collectible figure is specially crafted based on the appearance of the Imperial Death Troopers in the film. Standing approximately 32.5cm tall, the figure features a skillfully crafted black colored armor, new helmet with scope and LED light-up functions, detailed weapons including a long range blaster rifle (Special Forces DLT-19), a blaster rifle, pistol, and a specially designed figure stand! Don’t pass up on the chance to expand your Rogue One: A Star Wars Story collection with the new Death Trooper 1/6th scale collectible figure!

The official release of the widely anticipated new film, Rogue One: A Star Wars Story, is almost upon us. Star Wars fans around the globe will finally behold the epic new journey featuring a group of Rebel heroes on a dangerous mission to steal the plans of the Empire’s ultimate weapon of destruction – the Death Star. Now Hot Toys is delighted to present a special Deluxe Version of the 1/6th scale Death Trooper Specialist collectible figure to get fans ready for the exciting new adventure! The highly accurate collectible figure is specially crafted based on the appearance of the Imperial Death Trooper Specialist in Rogue One: A Star Wars Story. The figure stands approximately 32.5cm tall with the finely crafted sleek black colored armor, new helmet with scope and LED light-up functions, a black pauldron and chest rig, detailed weapons including a long range blaster rifle (Special Forces DLT-19) and pistol. The Deluxe version also includes a special Stormtrooper doll accessory and a specially sculpted diorama figure base! Build up your Rogue One: A Star Wars Story collection by completing your own Death Trooper squad!